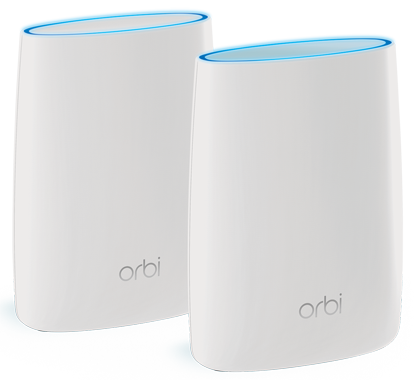 Please Note: All Prices are Inclusive of GST

Orbi is the simplest and smartest way to enjoy high-speed WiFi in every corner of your home. This Orbi WiFi System kit of two covers homes up to 4,000 square feet with strong WiFi signals. It creates a dedicated wireless connection to the Internet using Tri-band WiFi delivering maximum speeds no matter how many devices connect.

Orbi is the World's First Tri-Band Home WiFi System. From your front yard to your home office, to your pool, Orbi gives you reliable, secure, and crazy fast WiFi to every inch of your home.

Orbi is the only Home WiFi System using Tri-Band Mesh technology. Other mesh systems use dual band technology which can slow down your WiFi speed as you add more devices, or even more mesh units. Orbi provides a dedicated third band that provides the fastest possible speed between Orbi units letting you increase your range without limiting your speed.

Is Orbi like other Mesh Systems and Range Extenders?

No, other mesh systems and range extenders slow your speed as you add more devices or mesh units. Orbi creates a single high speed network that gives your entire home complete coverage. Orbi dynamically optimizes your connections for you without having to reconnect, giving you the fastest speed throughout your whole home.

Buffering shouldn't be a part of family movie night. Orbi helps prevent buffering and lag by creating a high speed Internet superhighway for all of your devices. Orbi Tri-Band Mesh WiFi System works with your current ISP's modem to maximize the speed you are paying for, to every inch of your home and beyond. 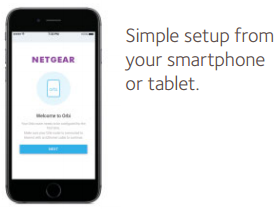 Unlike some Home WiFi Systems, Orbi works with your Internet service provider right out of the box without needing to change your current equipment. Orbi uses a single WiFi name (SSID) and with just a couple of clicks, your secure WiFi network will be ready in no time. NETGEAR does not require you to sign up for an account to use the Orbi Home WiFi System. Use the Orbi app to install & personalize your Orbi Home WiFi System. Available in the iOS and Android app stores

Orbi's sleek design and state-of-the-art technology steals the show. While other WiFi systems need at least 3-4 units to cover your whole home, Orbi gets the job done with 2.

Take your WiFi device from room to room and Orbi follows with the fastest WiFi speeds possible.

Orbi uses Tri-band WiFi to keep your Internet running at max speeds no matter how many devices connect.

Kit of two covers up to a 4,000 square ft home with highperformance AC3000 WiFi.

With simple setup from your mobile device, your secure WiFi network is ready in just minutes. 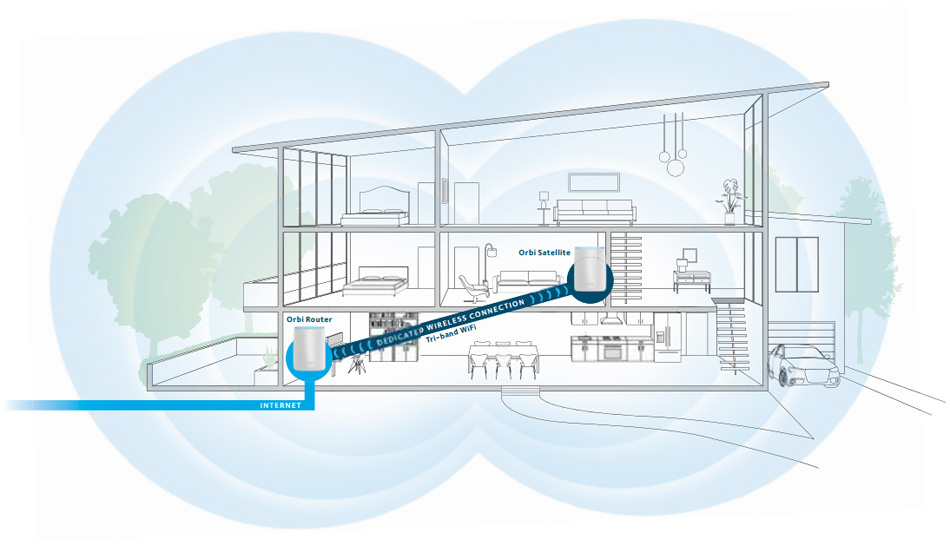 Enjoy fast WiFi in every inch of your home and get the speeds you're paying for.

Orbi creates a single network and will automatically move your device between bands to increase your WiFi speeds. Just sit back and enjoy Better WiFi. Everywhere. 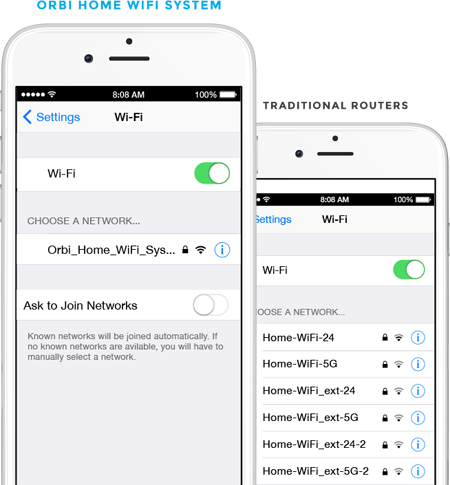 
What Do I Need for Orbi to Work? 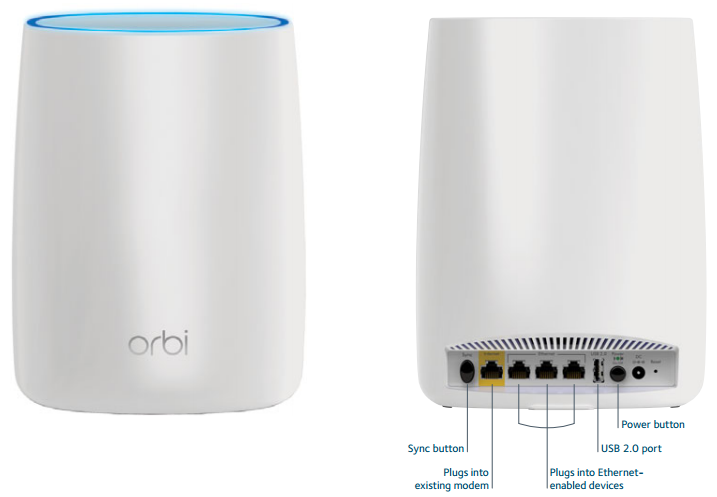 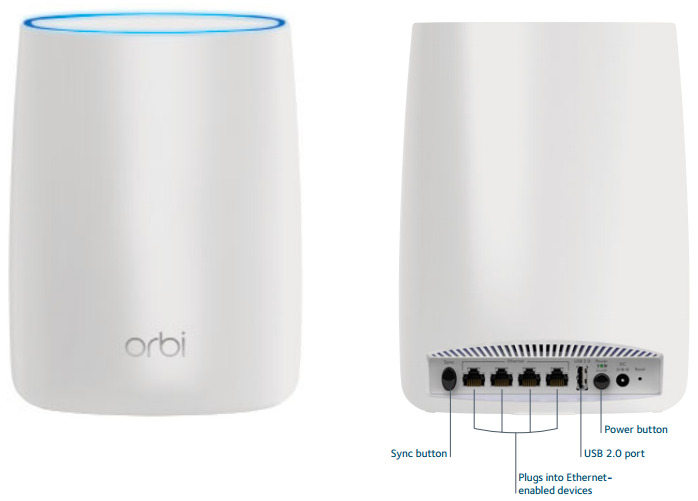 Can I use the Orbi router with an existing gateway or modem?

Yes. Orbi works with your existing gateway or modem.

Note: You can use your existing gateway or modem's WiFi network name for your Orbi network.

Can I connect my Orbi Satellite's Ethernet port directly to my existing gateway or Orbi router?

Orbi's advanced tri-band WiFi works best when the Orbi satellite is connected wirelessly to your Orbi router. This gives you better performance than many wired Ethernet solutions and gives you greater flexibility in placing your Orbi satellite.

Use the Ethernet port to connect home networking equipment to your Orbi satellite, such as NAS storage system or TVs, gaming consoles, or stereos.

How is an Orbi system different from an extender?

Orbi is different than an extender (sometimes called repeaters) in several ways:

Where should I place my Orbi Satellite?

See the following images for help with the placement of your Orbi router and satellite.

If your house does not resemble the houses in these images, we recommend that you place your Orbi satellite somewhere close to the center of your house. 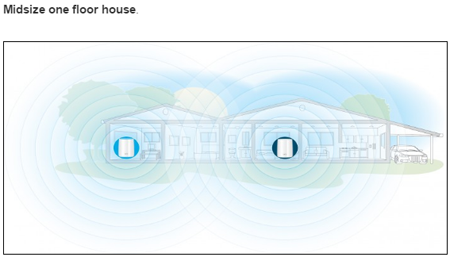 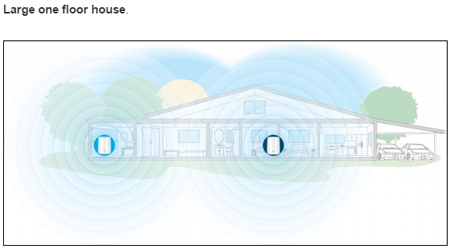 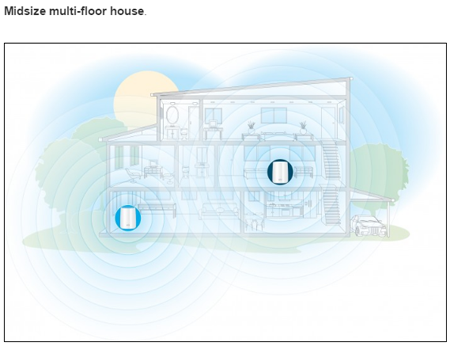 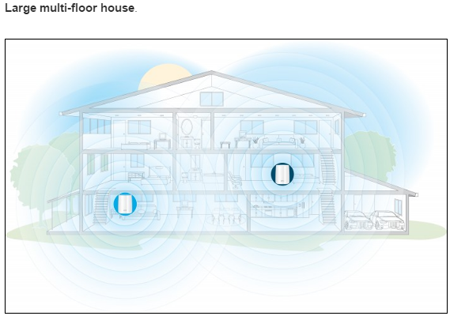 How do I set up my Orbi Router and Satellite?

To set up your Orbi router and satellite:

What do the LEDs on my Orbi mean?

Does Orbi replace my modem or gateway?

Orbi works with your existing gateway or modem.

What are the hardware features of my Orbi Router and Satellite? 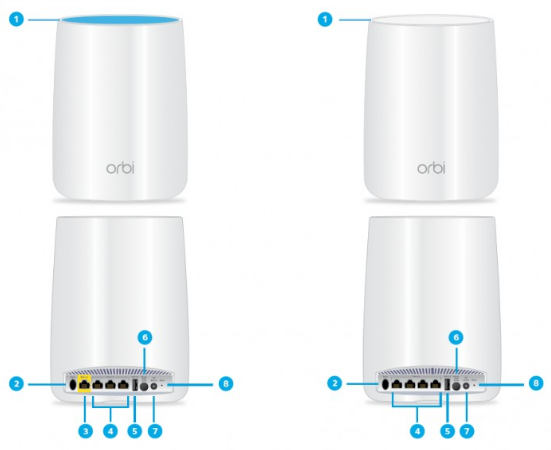 How many Orbis do I need to get the best coverage in my home?

An Orbi system (router and one satellite) provides WiFi coverage up to 4,000 square feet, under most conditions.

If your home is larger than 4,000 square feet, you will soon be able to buy an add-on Orbi satellite that will allow you to expand your Orbi WiFi system to cover more square footage.

Your Orbi system is powered by the world's first tri-band WiFi. Tri-band technology offers a dedicated 1.7 Gbps 5 GHz band solely for extending Internet speeds to Orbi satellites. Orbi's other two WiFi bands are dedicated to the WiFi devices that you want to connect to your Orbi network. Tri-band WiFi ensures that your Orbi WiFi System provides both reliable WiFi coverage and maximum Internet speed throughout your home.

The combination of tri-band WiFi and NETGEAR's state-of-the-art antenna design means that your Orbis do not need to see one another, giving you flexibility to position your Orbi satellite for maximum performance and personal convenience.

Should I turn off my existing gateway's WiFi if I'm using it with my Orbi router?

Yes, we recommend that you turn off you existing gateway's WiFi. This will prevent WiFi interference problems.