Please Note: All Prices are Inclusive of GST

Switching Engineered for AV over IP

Introducing the NETGEAR AV Line of M4250 Switches, developed and engineered for audio/video professionals with dedicated service and support. M4250 has been built from the ground up for the growing AV over IP market, combining years of networking expertise in AV with M4300 and M4500 series with best practices from leading experts in the professional AV market. AV codecs generally use 1Gbps or 10Gbps per stream and the AV Line of M4250 targets the widespread 1Gbps codecs.

PoE+, Ultra90 PoE++ and rear-facing ports ensure a clean integration in AV racks. M4250 switches come pre-configured for standard audio and video signals. When requirements are more specific, an AV user interface offers customization with port-based profiles. For audio Dante, Q-SYS and AES67 profiles are available, as well as an AVB profile requiring an AVB license sold separately. For video the M4250 offers profiles for NVX, AMX, Q-SYS, NDI, Dante etc. as well as audio/ video/control mixed profiles. When multiple switches are used, NETGEAR IGMP PlusTM brings automation for you to just connect them together, or with M4300 and M4500 switches.

Other IT use cases 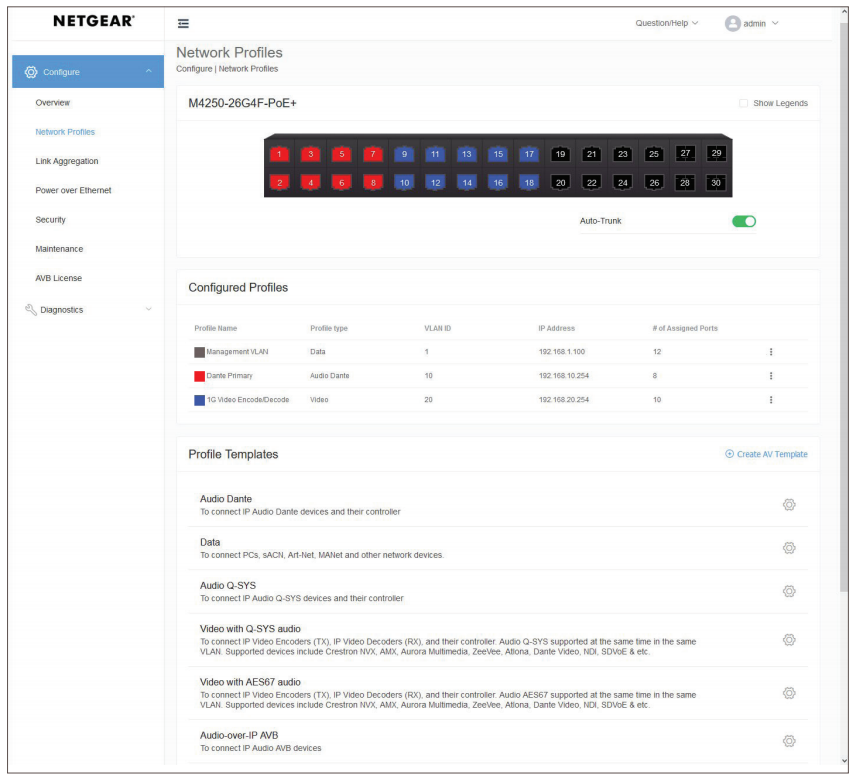 Ease of management and granular control

Engineered for convergence and AV-over-IP

A new AV Line of M4250 switches with out-of-the-box functionality and an industry-first: a concurrent second user interface solely designed with the AV Pro in mind.

NETGEAR has enhanced the experience for AV professionals by including a new user interface designed from the ground up. Pro AV customers don’t have to settle for an IT-centric interface with settings and IT-specific functionality they will never need. The new M4250 AV interface presents the common AV controls right up front with user-selectable profiles for common AV platforms making it a snap to ensure the settings are correct for a specific audio or video application.

When each M4250 is simply configured with AV profiles on certain ports, the AV Line offers automatic and dynamic configuration of multiple M4250 switches connected together. This automatic configuration, known as Auto-LAG and Auto-Trunk, combined with as NETGEAR IGMP Plus™, make setting up a complicated AV over IP network easier and quicker than ever before.